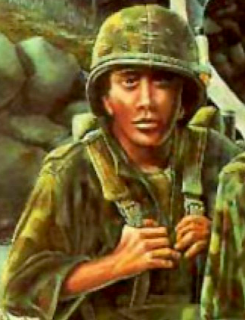 “Me, I’m a grease monkey. That’s why they call me “Monk” – I keep the Hum Vee purring and the LAV-25 limping along (so far). I guess I’ve always loved engines, which is why I’m so good at them…”

– T2k v1.0 Play Manual, page 7.
I think Monk is a good place to start for conversion because although every group needs a mechanic and backup driver, it's not necessarily a role that many players are going to jump at in a military-based game. I've also noticed there's a subtle nod to Monk in the nicknames suggested for the Mechanic Archetype, so it seems to almost be a sign. And who doesn't have a soft spot for the kid... right?
So let's convert him, falling back on that Archetype when necessary as we're not going the full Lifepath route.

Basic nationality, rank, and other core aspects are easy enough to decide on. Monk is technically only capable of being a Specialist if we follow the Mechanic archetype guideline but is described as being a sergeant, which is likely just possible with lifepath development. I'm not fussed too much, rank also has very little bearing in the latest edition.

Attributes and skills are converted using the guidelines from the Referee's Manual pages 107-110.

This is his starting converted Attribute & Skill breakdown:

My initial version of Monk converts across to a character with a lot of low-level skills and specialties compared to a character built with the Archetype method. Also, as the primary attribute for various skills shifts in Free League edition (notably STR and AGL swapping around for Ranged Combat and Mechanic moving from STR based to INT based), Monk's attribute spread doesn't make a lot of sense actually.

Compared to an Archetype build, the conversion translates into the same 1 A, 1 B, and 2 C level attributes. The suggested primary attribute for his closest Archetype is INT, however, not AGL or STR. Sure, AGL makes sense if he's more a driver than a mechanic (potentially a useful option as mechanic skill seems to be somewhat downplayed in this later edition - see later post), but I think STR and INT need to be swapped to align with the original concept - as the attributes stand, this initial attempt at conversion seems more of a brawler style of character who is less mechanic and more a traditional "Wheelman" however.

Monk seems to have one extra skill due to Language: English converting to PERSUASION B (Linguist) which doesn't really fit and is outside the Mechanic Archetype's suggested cores skills. In addition, he has only one level C skill which is TECH, although he does have two specialties for it and overall seems to have a lot of specialties - a total of 9 compared to a starting Archetype-based character's usual single specialty. Sure, I can see PERSUASION being useful for haggling but I'd suggest switching the B with the C of TECH at least, if not dropping it to D or losing it entirely and bumping up DRIVING or SURVIVAL (Scrounger) to C instead.

In terms of the specialties, if I had to choose only one I'd stick to Mechanic, but otherwise, it seems reasonable to drop to only 3: Mechanic, Racer, and Scrounger seem the most applicable. Of course, this is a converted character, so it's not unreasonable just to keep all the specialties if your Referee is not worried about balance.

So revised to fit the Archetype better this becomes:

So with the attributes reordered and skills added, it's easy enough to sort out the Hit and Stress Capacity. Given we're basing him on the Mechanic archetype, his CUF (Coolness Under Fire) is only a D (1d6). I'm not going to delve into this further now, maybe in a later post dealing with combat and/or survival.

So now equipment and gear, previously a big part of v2.2 and earlier editions. Like most other military characters, Monk starts with a standard helmet and flak armor so let's add those and then roll 1d6 for radiation or take the average rounded down. Again, let's leave Radiation for now and return to it in it's own post as compared to my previous article analysis it seems a lot simpler than in earlier editions.

Permanent                   3
That's actually mostly done now, let's just add his specific gear, weapons and make a note of any group equipment he carries or has been assigned - it's worth noting at this point that earlier edition T2k characters can have a lot of gear/resources compared to their Free League / 4th edition counterparts.

There's nothing extraordinary here, except noting that a converted Monk has quite a few more pieces of equipment than an archetype-generated character, and the extra reloads, the whole case of ammo, and the bulk of loose rounds provide him with an equivalent small fortune in Free League terms. His original concept has an M117 carbine, but this converts across easily enough to an M4A1 without needing specific treatment so I haven't looked at the weapon conversion rules yet. I've thrown in a dirt bike because I gave Monk a motorcycle in one of my earlier worked examples for the v2.2 travel rules.

Like the v2.2 version, this Monk is intended as a pretty green / “Novice” level support character – he’s a decent mechanic and capable driver but not very skilled at much else except standing watch while the grunts sleep. Without additional development, he may be better used as a somewhat just more than generic background NPC to streamline play or a backup or sidekick character if the part splits and you want to keep the players involved.
A few general observations to test for future conversions:

I'll link to a Google Drive final character sheet for "Monk" FL / v4.0 - this is based on the fillable PDF by Fenhorn over on the Fria Ligan forums and will paste in an image version here for reference.

This is essentially "Monk" re-envisaged as a tanker or self-propelled artillery crewman, not dissimilar to the way he originally converted and an amalgam of the artillery and armor variants for the original v2.2 version. Big Dream needs to be changed to something more protective of the group as a whole and I'd suggest dropping his rank down to Private First Class. He's more a driver than a primary gunner and only a passable mechanic. I've recalculated HIt Capacity & Stress Capacity included but increase CUF to C as this shifts across to more of a Gunner archetype but is really more a hybrid. Let's keep the same accumulated Radiation for simplicity.

Basic gear and weapons can stay as a crewman the same unless you want to have a character hefting around a dismounted MG in which case the HEAVY WEAPONS specialty is obvious, but this concept is more a driver or loader hence the Forward Observer specialty. Easy enough to tweak to be an M113 APC and/or mortar carrier driver if the group has that vehicle or an M2/M3 Bradley crewman likely now dismounted.

An older, grimmer but necessarily wiser version of the younger "Monk" above, perhaps one that made it back home to the US after escaping Poland. Bump him up to Sergeant earned in the field, but notice the reduced STR, lower EMP, and frailty from age and burnout to compensate for the extra experience and gain in CUF. This is a more world-weary field mechanic who has picked up a lot of decent tricks as a survivor (reflected in the additional Specialties closer to the initially converted version above), evolving past a mere "grease monkey" to become an expert able to keep anything vital to the group running. His dreams have changed and his moral code may well have shifted from his experiences as a survivor...

I'd leave his gear unchanged overall although perhaps replace the ammo crate with a collection of spare parts bartered or more likely scrounged from his travels across the ruined landscape. Easy enough to advance "Tank" above similarly accounting for age in terms of attributes and capacities but maybe more of a focus on a second Heavy Weapon specialty (probably Machinegun for use when dismounted) and then Blacksmith / Gunsmith than Computer / Electrician. Cook and Quartermaster might suit better than Scrounger.

Posted by therantingsavant at 10:00 PM